German
WhatsApp: 0090 531 977 99 83
My sister recommended health travels recommended after she had also had her yes lasered in Istanbul. I wrote to Matthias Weber and got very quick replies with all the required information about the LASIK travel. After I told Mr Weber my desired date, I got a booking confirmation of the OP. I only booked the flight and a hotel. When we arrived in Istanbul, the driver took us to the hospital in the reception and drove us to our hotel Sorisso in the district of Fatih. The next morning the driver picked us up from the hotel and drove us to the hospital. After we had been received by the hospital staff, the German speaking clinic employee came to us. She led us to the upper floor where the preliminary examinations took place. After the examinations, we went to the OP doctor who evaluated my results and eventually gave the OK. Still on the same day the OP took place. OP: In the lobby I was put on the protective clothing (hair protection, gown and shoe protection). I sat down in front of the OP room and waited until the doctors were ready. Mrs Kilic called me in and brought me into the OP Room. I put myself on the surgical bed and I got anaesthesia drops in the eyes. One eye has been covered, the treated eye was covered with a lids blockage. Then the flap was created using the pressure. This was followed by the actual Lasik OP with the laser. I had to fixate and focus on one Orange Point. During the OP you feel no pain, because the eyes are numb. The same was repeated for the other eye. After the OP I was led into a darkened room for about twenty minutes to relax. Mrs Kilic then looked at my eyes. After the OP you see somewhat blurred and the eyes burn and produce tears a bit stronger. This took several hours. One hour after the OP an assistant came into the patient room and gave me eye drops. The next day was for the post-examination. Then I was driven back to the hotel. In any case I recommend the ilasik journey to Istanbul, as the doctors and the Eye Clinic are at a very high level. The clinic is super-modern. Mr Weber of health travels was always reachable and contacted me immediately because of the pick-up times of the drivers. 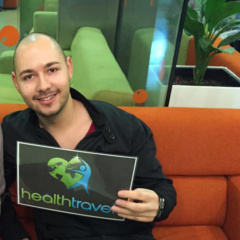