LASIK is an acronym for Laser-Assisted in Situ Keratomileus, a very popular surgical procedure for the improvement of vision by correcting refractory errors. The procedure is used by eye specialists all over the world.

LASIK improves vision in patients who have shortsightedness, farsightedness or astigmatism. It is convenient and popular because of the time duration that is needed for the treatment, which is less than a minute for each eye.

So, how does the simple treatment work? It involves reshaping the cornea (the protruding part of the eye), enhancing or improving vision.

The LASIK technique originated nearly a century ago. Doctors from around the world have been studying it and contributing to its growth throughout the years. European doctors were the ones who first acknowledged the possibility of keratectomy with sophisticated surgical means and it was a Russian doctor who actually tested it out on a patient of his who had hurt his eye. The doctor, Dr. Fyodorov, treated his patient by shaving off the surface of the cornea. He learned that the patient’s myopic eye had improved a lot after the medical procedure. So, he began studying the process and published his discoveries, but it was not until properly funded research was undertaken by American doctors about this procedure that it began to be recognized as a potential treatment.

Later on, American doctors began the use of laser eye techniques. Dr. Steven Trokel, an ophthalmologist, began using the laser on the cornea. In 1990, Dr. Lucio Buratto of Italy and Dr. Loanis Pallikaris of Greece pioneered the LASIK technique by successfully combining two previously known techniques. Those techniques were “keratomileusis” and Photo Refractive Keratectomy. Meanwhile, Dr. Jose Barraquer of Columbia developed a device called “Microkeratome” to cut thin flaps in the cornea to alter the shape of the cornea for the process called “keratomileusis”. From the time of its introduction into the field of eye surgery, millions of people have experienced considerable improvement in their vision.

LASIK treatment involves using the microkeratome to make an incision on the cornea and then an excimer laser is used to reshape the eye. The doctor uses the laser to smooth the curve of the the cornea or changes the overall curve of the cornea. The result is that the eye can focus on objects without the help of spectacles or lenses. 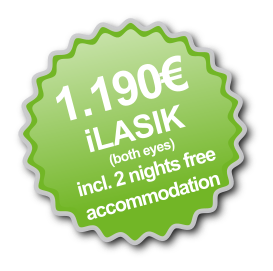